Hedges Station Museum ; The oldest building in Winfield, IL was built in 1849 by Jim Hodges. From 1849 to1854, it was used as a rail passenger depot along a strap-rail track segment laid when the Galena and Chicago Union Railroad came through the area. It served as a train depot up until 1854, when Galena and Chicago Union Railroad built another depot on the south side of the tracks going through town. The building also served as a Post Office, and Inn/Tavern for railroad travelers and lastly as the residence of the Besch family. It also is the oldest remaining train depot in the State of Illinois. The depot was previously located on village-owned property adjacent to the Winfield Village Hall.

In 1978, village leadership became interested in expanding Village Hall and its parking. The plan was to demolish the 1849 depot. That same year, the Winfield Historical Society was formed to save Hedges Station. The Society plan would be to restore a portion of the building as a period depot museum to be called "Hedges Station" in honor of John Hedges, its first stationmaster. Other portions would be developed as a museum focusing on the Winfield area, while the basement, which would be new construction, would serve as a meeting space. The move of the depot to the northern end of Oakwood Park took place August-1981, through an agreement between the Winfield Historical Society and the Winfield Park District. 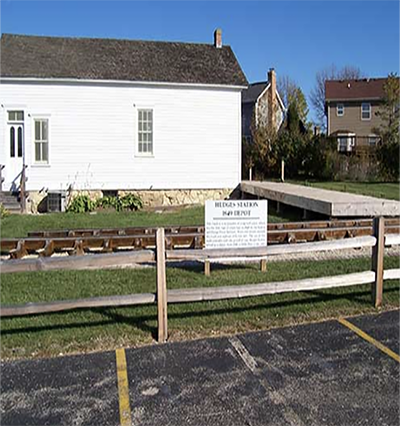